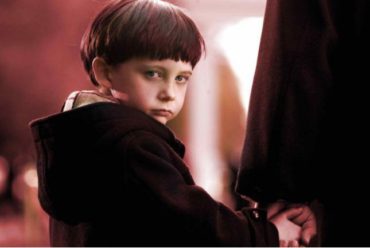 What scares you the most? I, personally have always felt that a scary statement told by a child very innocently, is much more scary than told by any big actor or actress. Imagine the kids you know tell you something scary as if it didn’t bother them or they thought it was absolutely normal. Well, to make it more interesting imagine you are a babysitter and these lines were told to you by the kid you were babysitting. Here are Top 10 Scary Lines told by a child to babysitter put together by “Thats My Top 10″ Team.[symple_divider style=”solid” margin_top=”20″ margin_bottom=”20″]

I watched a few kids while their parents were at a movie. I put the youngest kid (4) to sleep and watched T.V. till the parents came home. The next day the parents called. According to the 4-year-old kid I stood in the doorway and stared at him for a very long time, smiling. I was so confused I didn’t know what to say.

I was cuddling my friend’s 3-year-old son and he said, very seriously, “I promise I won’t ever chew on your bones. I promise.”

I once babysat a girl called Sarah who used to love when I babysat. I know this because her mom used to tell me how she always requested me over the others. But Sarah took it a step further one evening and said “when you died I want to put you in a glass jar so I can keep you and see you forever.”

I was looking after Jack (A five year old) who said a man named Jacob who dressed like a lumber jack was sitting next to me on the couch. He must have seen the shock in my face, and said “Don’t worry, he doesn’t have any arms.”

Boy in my closet

Two years ago, I was looking through my elementary school yearbook with my 5 year old cousin, when we were at a page with a 2nd grade class, she pointed to a boy’s photo and said ” that looks just like Nicolas!”. When I asked who Nicolas was she just said “The boy in my closet” and kept on looking through the pictures. I almost died.

One night I was babysitting my friend’s children. The youngest (about five years old) drew a picture of a woman hanging from the ceiling, looked up at me and said “she told me to draw this. She’s coming for you. Hide.”

Looking after my little cousin in Montana one night, and he started telling me about the `Creeper Man’ who lives in his mom and dad’s bedroom. He brings it up after he visits them. I made the mistake once of asking what he looks like. He said “Oh, he doesn’t have a face.”

On the front porch

I lost my boyfriend to a stray bullet a few months back and when I went to visit his little cousin a few days after it happened, he came up to me while I was crying. He asked me why I was crying and so I told him that I missed my boyfriend. He gets this confused look on his face and then says “Why? He’s sitting on the front porch.”

A few years ago, I was putting my friend’s daughter to bed for the night. She was about 3 at the time, and she was fighting going to sleep. She asked me why she had to go to bed, and I said “Because it is late and it’s time for little girls to get a good night’s rest.” She then pointed at nothing across the room and said “What about that little girl?”

I was heading to the bathroom on the second floor of my aunt’s house when I saw my cousin, April, on the stairs. April was four and very animated. She was busy making funny faces while sitting on the stairs. I asked her what she was doing. She said, “I’m copying the lady with the braid.” I looked around, there was no one else but us. I asked, “where is the lady, April?” She pointed to a beam running parallel to the stairwell. I asked April, “what is the lady doing?” She said, ‘making’ funny faces.” I smiled and started walking up the stairs again when April said something that stopped me in my tracks. April, “her braids is around her neck.” I turned back and asked April to repeat herself. April pointed, “the lady is hanging by her braid… She’s making funny faces.” Then April started making a face which I then realize was it someone gasping for air.