First of all, I’m not one of those pro riders who go on a long-distance ride every 3 or 6 months or even on every weekends. Royal Enfield Classic 350 is the first motorcycle I ever rode on. Since Royal Enfield motorcycles are becoming famous day-by-day and their fan base is increasing every year. It is important to explain the important aspects of RE motorcycles and their uniqueness apart from their competitors in India. Rather than taking a typical statistical approach, I’ll explain my personal experience that I got from my Royal Enfield Classic along with the new features included in the motorcycle. 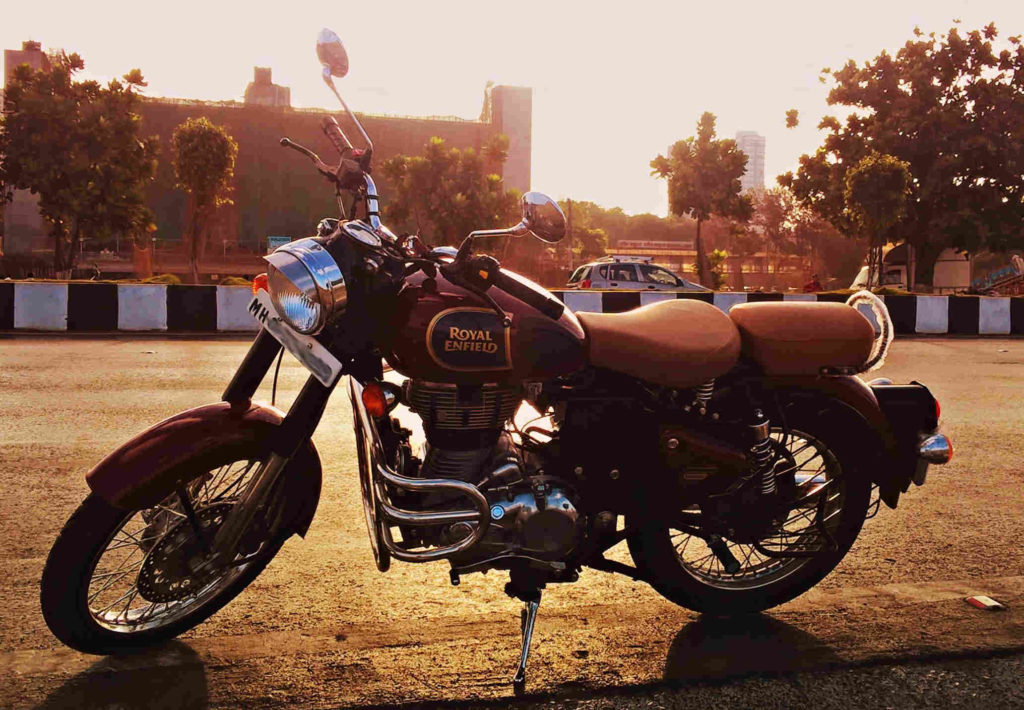 As many of you riders are aware of the new engine norms issued by the Ministry of Transport (GOI). From 1st April, 2017 onwards, all two wheelers come with BSIV (Bharat Stage IV) engine. The government has taken this decision to control air pollution. Another aspect is the AHO system, which stands for “Automatic Headlight ON”. Yes! Your new bike’s headlight will be automatically switched on as you turn the keys.

This particular feature is implemented to improve visibility of the vehicle. It was first implemented in European countries and it was quite a success there, but I do not know how much visibility this AHO will increase on a bright sunny day *Wondering*. Personally I am already frustrated of people signalling me about my headlight being on even though it is done on as a good gesture. It has been two months already since the new norms were implemented. As more bikes with AHO run on the streets, pedestrians will get used to it and stop making those weird squeezing hand gestures. 😛

I have ridden my Royal Enfield for 250 km, I only get weekends because of my busy work schedule on weekdays. So far the performance is pleasant, and I love my RE for that. As you reach the 50– 60 kmph speed range, you’ll get the smoothest feel. I try to keep the speed between 40–60 kmph range to get the mileage around 30–40 kmpl.

One important thing, Royal Enfield still hasn’t included the fuel gauge its 350cc motorcycles (except the Thunderbird), so you have to do the Indian way of checking the remaining fuel and that is by shaking the bike to see how much fuel is left and count the kilometres the bike has travelled. The handling is also smooth and good. When riding solo, I usually take those near- MotoGP-style turns with ease. When I purchased the Royal Enfield Classic, many people tried to scare me by pointing out the bike’s heavy weight. Well as for that matter, I found the RE Classic easy to balance when compared to Splendor. The rear drum brakes do a decent job while the front disc brake is amazing, saved my life on one occasion.

What makes a person purchase a Royal Enfield motorcycle? Obviously, the looks and the thump. I have chosen the Royal Enfield Classic in Chestnut Red colour. I like the way the colour blends into the vintage-style design to give a retro look. Looking at the bike is visually pleasing and never makes me doubt my decision on purchasing it. As for the thump, it is soft, not as loud as old RE motorcycles had. Many of my friends suggested me to change the exhaust. Although it quite tempting, I’ll advise against it. Royal Enfield has designed the current exhaust by keeping the engine in mind. If you try mess with the exhaust, then not only the fuel consumption rate will get affected badly, but also engine life will be reduced.

This one aspect makes the Royal Enfield bikes stand out from the rest. There are many customisation options available for all the RE bikes. I have seen many people attaching a bronze plate on the bike. I personally don’t like that! When you are customising your bike, look at the colour and choose the accessories and decorations accordingly.

I’ll take an example of my bike. I’m not going to don those flashy bronze plates on my bike, it just looks ridiculous. I have seen many people attaching those headlamp grills. In my view, those grills look better on black, green and desert storm colour. Headlamp grills are ideal when you want to give your bike a military-style look. My RE Chestnut displays the retro culture of the 70s, so I’ll choose something matching that era such as a vintage guitar artwork sticker. Remember one thing, all RE bikes are aesthetically rich, therefore don’t put too much accessories on it. Doing so will ruin the original look. Plus, it will make you look like a street thug rather than an Enfield rider.

RE bikes may fall short of the mileage with respect to other Indian competitors, but they are way ahead in case of power. No other bike in the similar range can show endurance and toughness on a rough muddy track like Royal Enfield bikes do. The classy vintage looks also make the bikes stand out. No other bikes can be compared with RE bikes in this aspect. To conclude, I’ll only say that if you love the power and thump, choose any Royal Enfield bike, but don’t choose it for a showoff.  Royal Enfield has engineered their bikes to satisfy the riding passion within you, not to please the eyesight of passing pedestrians.